Essays on my country topic India for Students of UKG, primary, middle and high school. The article includes our country 10 lines essay, my country my pride essay, my ideal progressive and powerful, my motherland India, its culture, beauty, love and strength. Essays and short paragraphs for UKg kids class 1,2,3,4,5,6,7,8,9,10th level students in English

1. My country India My Pride Essay

India is a famous country all around the world. Indians were slave to British. They got independence after great  sacrifices and struggles. They were subjugated nation under the dominion of British. India became an independent and sovereign state on 15th August 1947. 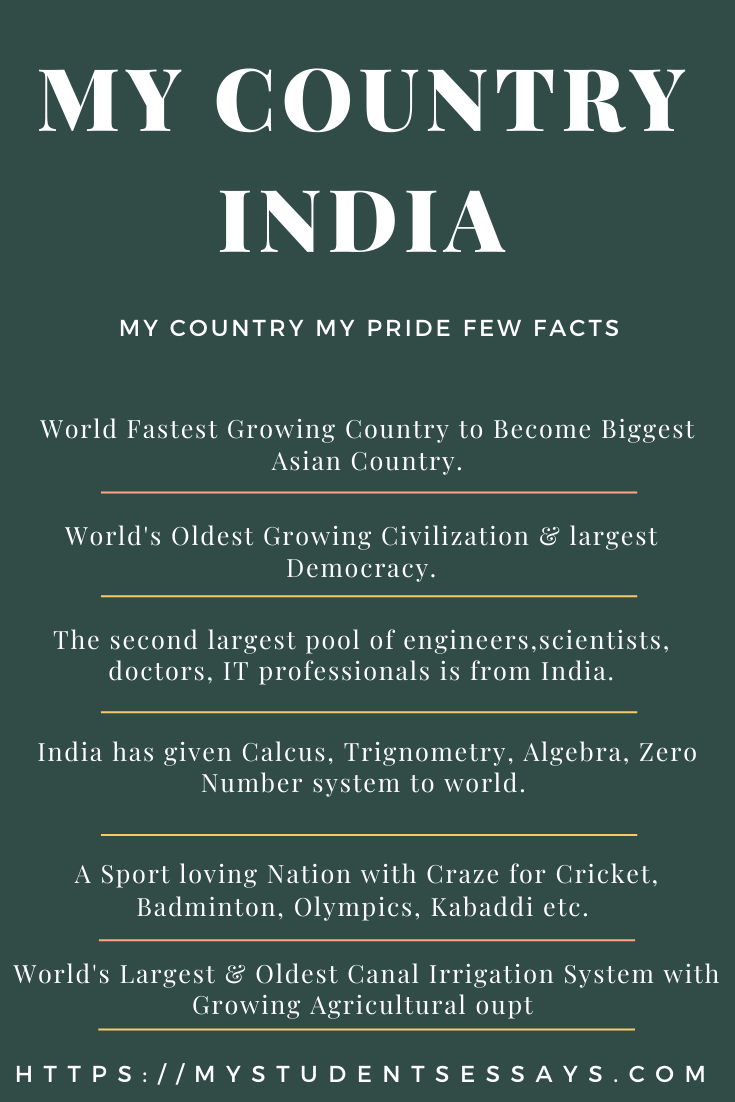 Jawaharlal Nehru became the first prime Minister of India. He hoisted the flag of the nation and declared that India has woke up to life and freedom. India was declared as the democratic state because till today India is the land to people belonging to different religions, castes, cultures and traditions.

India is my motherland and all people living in India are my family. The mother tongue of my country is Hindi and many other languages are spoken here. India is rich in natural beauty and our land provide heart touching nature.

There are many natural scenarios, places monuments and historical heritage which attract the minds of the people. India is very famous for being the oldest civilization world. The people of India are very courteous and hospitable.

I feel proud on my country India because all the great leaders of this nation arose from poverty and led the nation. Many great writers and reformers got birth on this land who enriched the literature of India.

The architecture of my country is famous throughout the world. The Taj Mahal is  one of the greatest monument of the world that exist India. It is considered as the symbol of eternal love.

Apart form it the Kashmir, called the heaven on the earth,  is in India. India is very famous for its agriculture.  The chief crops of India are sugarcane, cotton, jute, rice, wheat and many other cereals.

I am proud to be an Indian because my country is very rich in natural resources. It is very famous all around the world. Indians are very hard workers. They work for their country. India is progressing rapidly in all fields of technology and science.

India is a peaceful and democratic country. People belonging to different castes, creeds and religions live here peacefully. India is the nuclear state. APJ Abdul Kalam is called as the Missile Man of India who made India prosperous in the filed of technology.

India is one of the seventh largest country of  world. It is the second most populated country of world. It is also called as the Bharat or Hindustan. India is a peninsula because it is surrounded by oceans from three sides.

The tricolor flag of India in the upper most par, the saffron color,  represents purity. Whereas, in the middle, the white color, represents peace and in the lowest part of the flag, the green color, symbolizes fertility. The national anthem of India is “Jana Gama Mana” and the national song of India is “ Vande Mataram”.

India is also called as the land of spirituality, philosophy, science and technology. It is also familiar for its agriculture and farming practices.

Many kinds of grains and fruits are grown here. India has unity in diversity. People live here peacefully. There are many cultures and traditions that are practiced in India.

1. My country is my pride and I love my country excessively.

2. My country is a democratic country, here people belonging to different religions live together.

3. India is famous for its agricultural activities and farming. Many useful crops are cultivated here.

4. India is a paradise for tourists because it is rich in monuments, tombs, churches, temples, museums and historical buildings.

5. India the very country where Taj Mahal,Qutab Minar, Red Fort and many other wonders of the world exist.

6. This is the place of the great rivers, valleys, mountains, lakes and oceans are found abundantly.

7. The national language of India is Hindu and many other languages are spoken in India.

8. The people of India are called Indians, they are very honest, faithful and strong.

10. There is majority of Hindus in India and the main religion of India is Hinduism.