Intelligence is one of the wonderful ability of mankind. The following essay explains about the intelligence its definition, criteria and further adaptability or change is its measure. This essay is quite helpful for high school and college level students.

The Measure of Intelligence is the ability to Change

Change is a permanent phenomenon, there is hardly any object in world which doesn’t change. The intelligence is a force which changes man with the passage of time, we can say that one grows when he changes and one who doesn’t change is not intelligent. 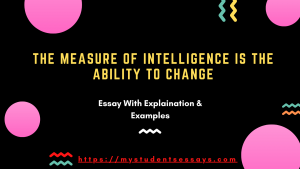 There are two types of changes that occur in humans they are positive and negative change. It is inevitable, one needs to be proficient to navigate those changes.

One who fails to navigate change in right direction meets misfortune and pain ahead. One who learns to navigate natural changes in life is intelligent and can succeed in life. Intelligence is measured when one brings modifications in change, works accordingly.

It is noticed that when an intelligent one faces challenges in life he changes and cope up with challenges of life, or when someone reads a book finds something interesting to adopt in life which changes him within.

The forces of world are an stimulus which forces an intelligent one to change like pain is an stimuli which bring change in us. One faces several attacks which are a morsel of change, like when someone quits his habit it is also a change.

One who desires to bring about desires transformations in life he must have good relationship with his parents because the ability to bring positive change comes from them.

Change comes from within, one who purifies his thoughts he always changes positively, because it is man who controls his body. One can not do anything wrong whose thoughts are purified, he will have control on his body organs.

The physical appearance of a person can also be changed when someone gives time to it, everything changes.
It is said that the company of people and the books you read can change you more than anything else.

Nelson Mandela has rightly said that “Education is the most powerful weapon you can use to change the world”. Intelligence and wisdom is earned from books, it is education which bestows us intelligence. When intelligence is collected from knowledge, the brain assimilate it and predicts to change.

Intelligence is a signal to update yourself for future or for the time to come. That’s why failure is considered as the pillar of success because one fails when he or she predicts wrong, incorrect prediction fails man while correct predictions succeed man.

If one won’t dare to predict wrong how would he be able to predict correct. When once mind start predicting it never goes back, it will lead one to progress one day. Intelligence is the right use of knowledge. Knowledge which doesn’t make one intelligent is useless.

Life without change will become a Eco-chamber or imprisonment, one who fears to predict can not lead a peaceful life.

One must embrace new information, new experiences in life, new challenges, new relationships to change himself. Time is not static, nor it will stop for someone, time and tide waits for none.

One who changes with the passage of time is the intelligent one because he knows world is changing, everything around is changing, if he won’t change he will be left behind. As C. JoyBell. C has said that “The only way that we can live, is if we grow.

Related:  Essay on The whole Purpose of Education is to turn mirrors into Windows

And the only way we can become exposed, is if we throw ourselves out into the open. Do it, throw yourself”. While Mahatma Gandhi has said that be the change that you wish to see in the world.

A wise and intelligent one will always change himself. The real change comes from within, the wisdom is the eye of change, intelligence gives way to change. One can not bring a big change without changing himself.

For example one who desires to change within five years he or she from being single and having no kids can be married and have kids within such short period of time.

Or just consider where you had been five years before and where are you now. If there had been an iota of intelligence in you would had changed tremendously in last five years.

It is very necessary to have a goal in life, one who desires to achieve any desired destination he starts changing and tries every waking moment to reach there.

One who makes even a trifle change in right direction, slowly he experiences a flood of energy and motivation which leads man to success.