Mahatma Gandhi was an epitome of truth and honesty. The following long and short essays, Paragraphs and speeches focus on his life, achievements, sacrifices struggles to win the freedom for Indian as the father of Nation.

These essays are brief, simple and easy to understand with quotes, images and info graphics for Ukg kids, children of class 1,2,3,4,5,6,7,8,9,10th and higher level students

Mahatma Gandhi  was born on 2nd October 1869 in porbandar Gujrat India. His full name was Mohandas Karamchand Gandhi. He was given title of Mahatma by RobindranathTagore which means great soul.

He belonged to a middle class family of Gujrat. He received his early education there in India. After matriculation exams he went  England to study the law and returned India as a lawyer in 1890. 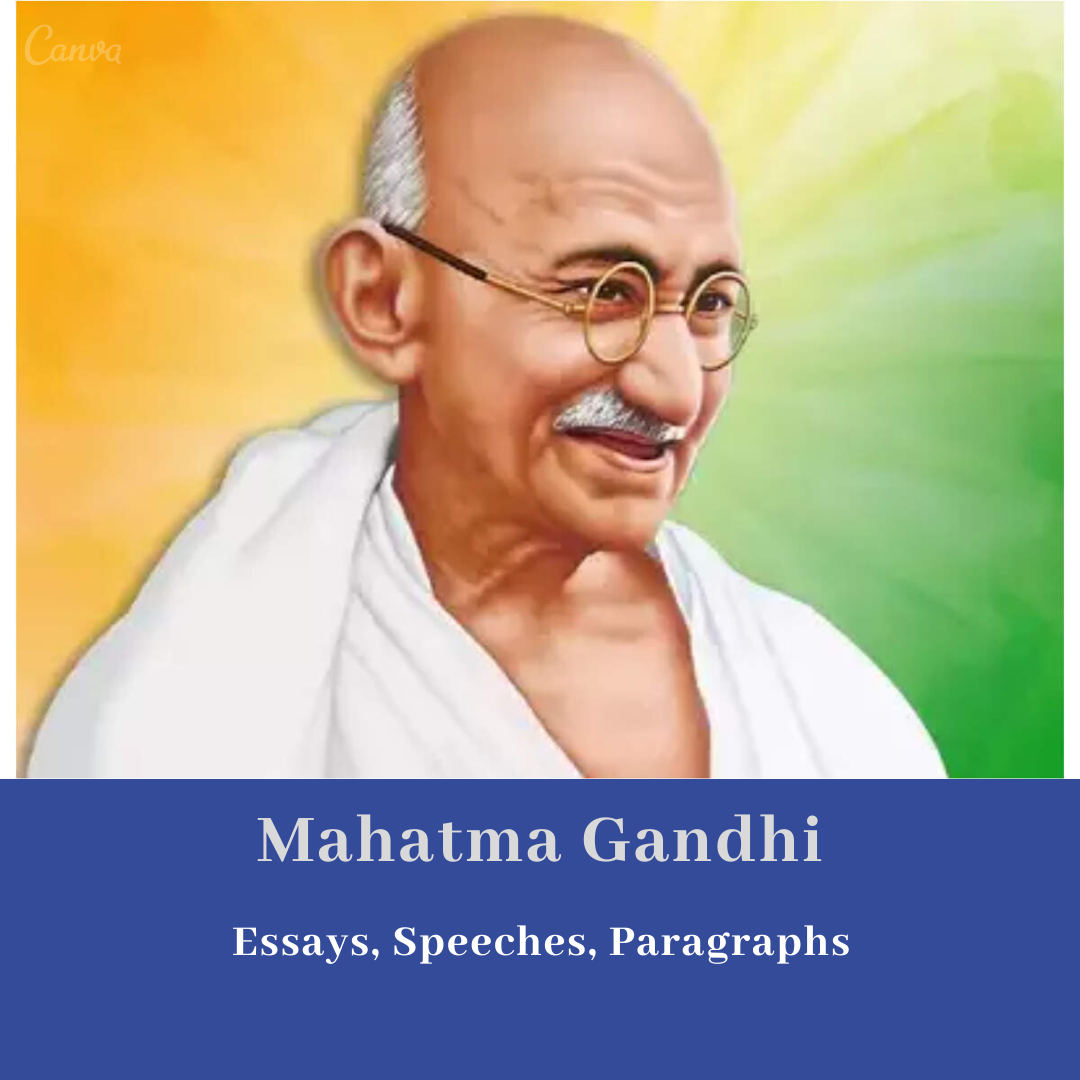 The man for whom it is said that he was the friend of all and enemy to none. He helped all Indians and loved all including Hindus and Muslims, that’s why he is loved and liked by all in every part and parcel of the world.

In the history of India he is known as the father of the nation. Indians lovingly call him BAPU JI. It is he who fought for the independence of Indians and blessed them with a separate sovereign nation. He was a humanitarian and worked for the welfare of humanity in general.

He didn’t believe in sectarianism nor in grouping, he sought and fought for the nation where there is religious pluralism, he wanted to establish a nation where people belonging to different religions lead a happy and prosperous life.

He wanted unity of Hindu Muslims who were in majority in subcontinent, he believed in unity of Hindus and Muslims. He paid selfless services and sacrifices for the betterment of humanity on the whole.

During 1919 he started a peaceful movement called non-violence movement. Through this movement he aimed to have no fight and no violence in subcontinent.

He was sick and tired of British rule over Indians, he believed that British were ruling over Indians because of co-operation of Indians so he launched a movement named as non-cooperation movement before two and half decades of independence of India in 1920.

This movement aimed to cease cooperation with British. After this campaign Indians boycotted all foreign goods and banned use of products of English people, they started using domestic products only.

When he couldn’t tolerate the miserable and pitiful plight of Indians who were starving and suffering under the British rule, he devised new plan to remove and dismantle the dominance of British over Indians.

In 1930 he started a civil disobedience movement to weaken the power of British over the territory of India.
Later in 1942 he started Quit India Movement, through this movement he forced British to leave India.

He faced many metal and physical tortures and was forced to stay back but he didn’t yield in to the malevolent tactics of British. He was jailed and imprisoned many times, he suffered to a large extent, in those stormy days of oppression he remained steadfast to his mission and gained an independent nation for Indians.

He paid unforgettable sacrifices in the history and politics of India. Through these movements he awakened all Indians and inspired Indians to fight for their rights and independence.

Life Lessons For Us

One can learn the lesson of truth and honesty from his life because his whole life was an experiment with truth, modesty, simplicity, sincerity and dedication. He gave a message of non-violence in human conduct which is the divine nature of human spirit.

He preached truth and goodness. His heroic struggles and efforts teach a lesson that one who aspire to achieve anything he can achieve it by struggling hard and sacrificing.

Mahatma Gandhi the greatest leader and the father of India who worked every waking moment for the freedom of Indians. He lived a simple life but left an unforgettable name in the history of India.

Paragraph on Mahatma Gandhi  For Students

Mahatma Gandhi the founder of nation, the father of India who is also known as the BAPU by Indians. Mohandas Karamchand Gandhi was born on 2nd October1869 in a well to do, middle class family of porbandar Gujarat.

His father Karamchand uttamchand Gandhi was a merchant in Gujrat. His mother’s name was Putlibai. Gandhi got married at the age of 13 with kasturba and had four children from her.

He was very hardworking and intelligent since his childhood. He got primary education from Gujarat and passed matriculation examination from Bombay India. He was sent to England to study law. He graduated in law from England and returned India as a lawyer.

As he reached India soon he left to South Africa where he spent 20 years of his life. He fought for the rights of Indians and black people. He became a popular leader of black people because he inspired them to raise voice against injustice.

In 1915 he returned to India and joined Indian national congress. Being an active member of Indian National congress he studied and observed the condition of Indians and couldn’t bear the injustice and inequality which Indians were facing.

He believed in unity and justice to all, he led Indians and influenced them with his rich ideas and united them under a platform and started fighting for their cause.

He started Satyagrah Movement to end the cruel and unjust practices of British. His non-violence movement was a milestone to the freedom of Indians. He didn’t like division, so he tried to unite all people of subcontinent and fight for their rights.

He didn’t allow Indians to fight among themselves nor to hurt any one, he wanted to fight against injustice without any bloodshed.

When he observed that British succeeded because of the cooperation of Indians, he started Non-cooperation Movement, after this campaign all Indians said no to the products of foreign and used domestic goods. After this movement British lost the power and dominance over Indians.

Finally he started Quit India Movement, through this movement he forced British to leave India.In reaction to his endless movements British imprisoned and jailed him but he didn’t leave his mission. He sacrificed and suffered a lot during this period, at last he succeeded to get an independent state for the people of India.

He was very simple and lived whole life in simplicity and advocated peace and love. He reformed the society and rooted out social evils. He loved humanity and fought for all people of India. His message is the message of love and brotherhood. He tried to the utmost to unite people of different religions and created among them.

All Indians are indebted to this great soul who worked hard day and night for their freedom. He laid the foundation stone of such a strong nation whose stubborn resistance spoils the tactics of foes till this day. The title of Mahatma suits him because he really possessed a great soul. May his soul rest in peace.

Mahatma Gandhi whose full name was Mohandas Karamchand Gandhi.He was born in a middle class family of porbandar Gujrat. His father’s name was Karamchand

uttamchand Gandhi and his mother’s name was Putlibai. His wife’s name was kasturba. He got his early education in Bombay and went England for higher studies where he graduated in law

He was a revolutionary man, he fought for the rights of common people.Throughout his life he stood by the poor and oppressed, he understood the miseries of low class people and tried to solve their problems.

He was philanthropist, he never discriminated people nor ever thought to divide them rather he united people of diverse religions and created brotherhood among them.

He is widely known and celebrated for his struggles and efforts for the independence of Indians. He was very genius and sagacious person. He being the salt of Indian soil, never let British usurp the basic rights of Indians.

He headed many movements in order to break the chains of slavery in which millions of Indians were subjugated. He is famous for his movement of non-violence and quit India Movement.

He disintegrated the cooperation with British government and inspired people to do so in order to weaken their power and prestige.

His whole life is an example of utter sincerity, utter self-sacrifice, truth and honesty. He rendered selfless services for mankind and people of India. Though there were many to fight for the cause of others but he was the first person to come forward and lead people.

He didn’t live for himself, nor he had any materialistic desire. He didn’t fight for his name and fame but for the welfare of mankind.

He is no more among us but his ideas, beliefs and lessons are a leading light for the generations to come. He will always remain alive in the history of India.